India is arresting Kashmiris for anything & everything under the “UAPA law”. 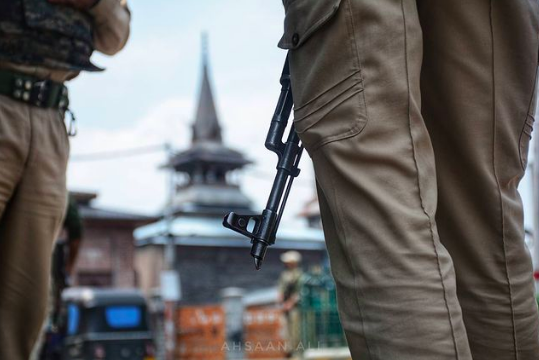 In Kashmir, the UAPA is being used to stifle all forms of dissent and expression of the people against the ongoing occupation and settler colonization. India is expanding the definition of “terrorism” to include all forms of not just legitimate armed resistance to colonial rule, but also non-violent expression. This further endangers Kashmiri civil society and rights defenders.

What is the UAPA?

The Unlawful Activities Prevention Act is in place to “prevent terror-related activities, unlawful associations, and activities that may endanger the sovereignty and integrity of India.” It allows the government to jail an individual for six months, without a trial or bail, stonewalling any judicial intervention. According to Amnesty International and the United Nations, the UAPA does not meet international human rights standards. The UN has said that the UAPA utilizes “imprecise criteria, contains a vague and overly broad definition of  ‘terrorist act’, allows people to be held in lengthy pre-trial detention and makes securing bail very difficult”.

On Nov. 22, Kashmiri human rights defender Khurram Parvez was arrested by India’s National Investigation Agency (NIA), under the draconian UAPA law. This is one instance amongst many in which India has used the UAPA law against Kashmiris. 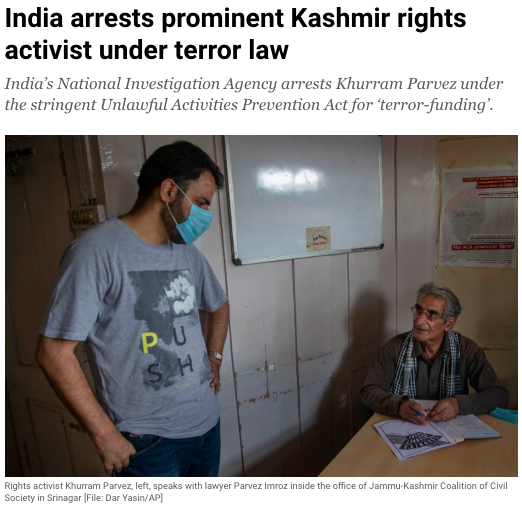 Of 5,922 persons charged under this law across India, between 2016 and 2019, individuals from occupied Kashmir account for around 15 percent (876) even as the conviction rate remains little over 2 percent, prompting rights groups to conclude that the law has been engineered to facilitate the abuse of power (The Quint, Shakir Mir). According to AlJazeera, since 2019, 2,300 people have been arrested under the UAPA in Kashmir. Almost half of them are still in prison. The steady increase of UAPA cases in Kashmir is alarming as you can see in the infographic below (as per NCRB data): 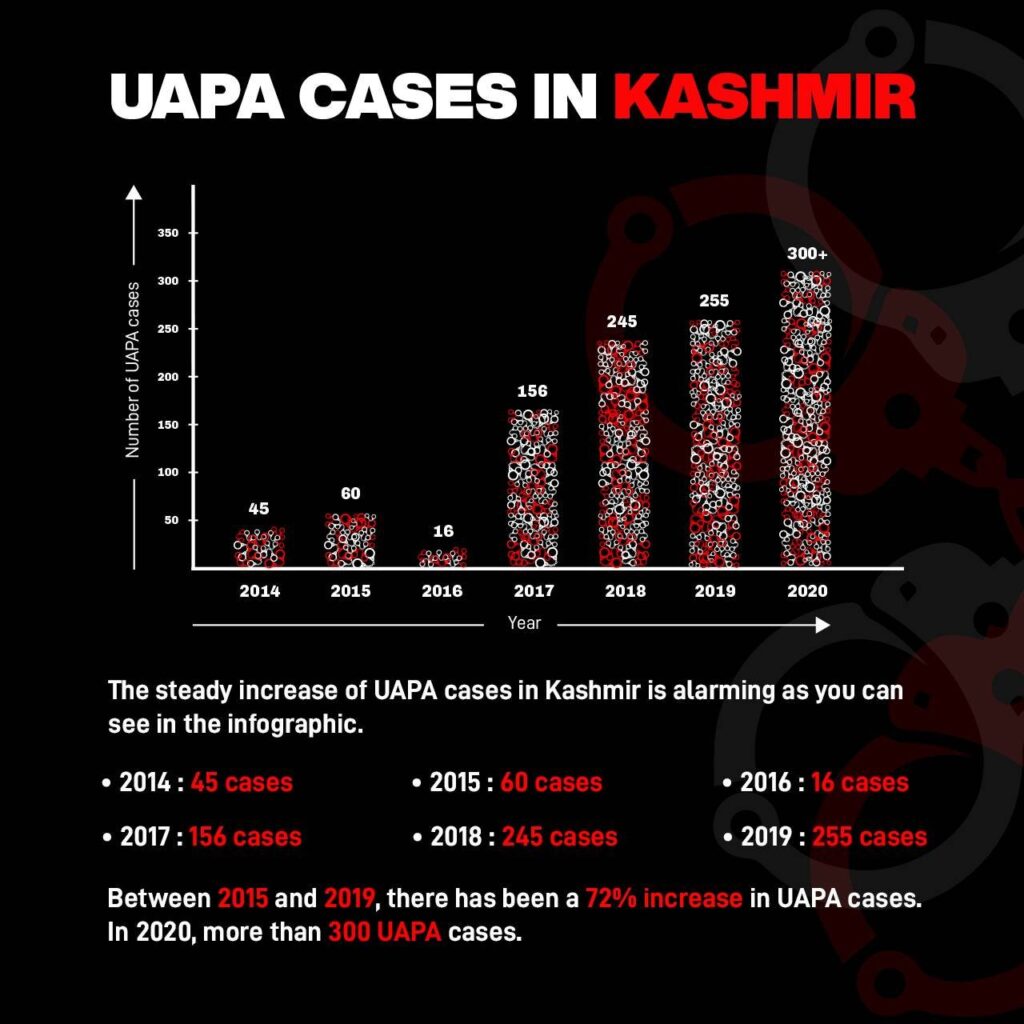 Here are some of the reasons you can be charged under anti-terror legislation in Indian-occupied Kashmir.

Kashmiri journalists continued to be booked under UAPA for doing their job. This includes Aasif Sultan, who earlier this summer, completed 1,000 days in prison after being arrested in August 2018 under the UAPA. He was jailed for writing an article on Burhan Wani, a pro-freedom Kashmiri rebel who was killed by the Indian armed forces in 2016. Sultan, 34, who worked as an assistant editor for a Srinagar-based English magazine, is accused of “harboring known militants,” an allegation he denies. He has also been charged with murder, attempt to murder, and other crimes. His family insists that he is being held for not revealing his sources. (Bilal Kuchay, Aljazeera, 2021).

During the first two months of 2020, the Indian government slapped the UAPA on social media users. “I personally know six people who were summoned by the police. They have been let go after signing a bond that they will not write anything and if they do, they will be booked under serious charges like Unlawful Activities Prevention Act (UAPA),” says one youth living in Indian-occupied Kashmir. In addition to that, a notorious torture site called Cargo, located in the capital city of Srinagar, has been “used to interrogate and torture young Kashmiri social media users who have been critical of the Indian government’s repressive policies implemented in the region since 2019”. Users who access the internet via proxy servers (VPN) have also been booked. 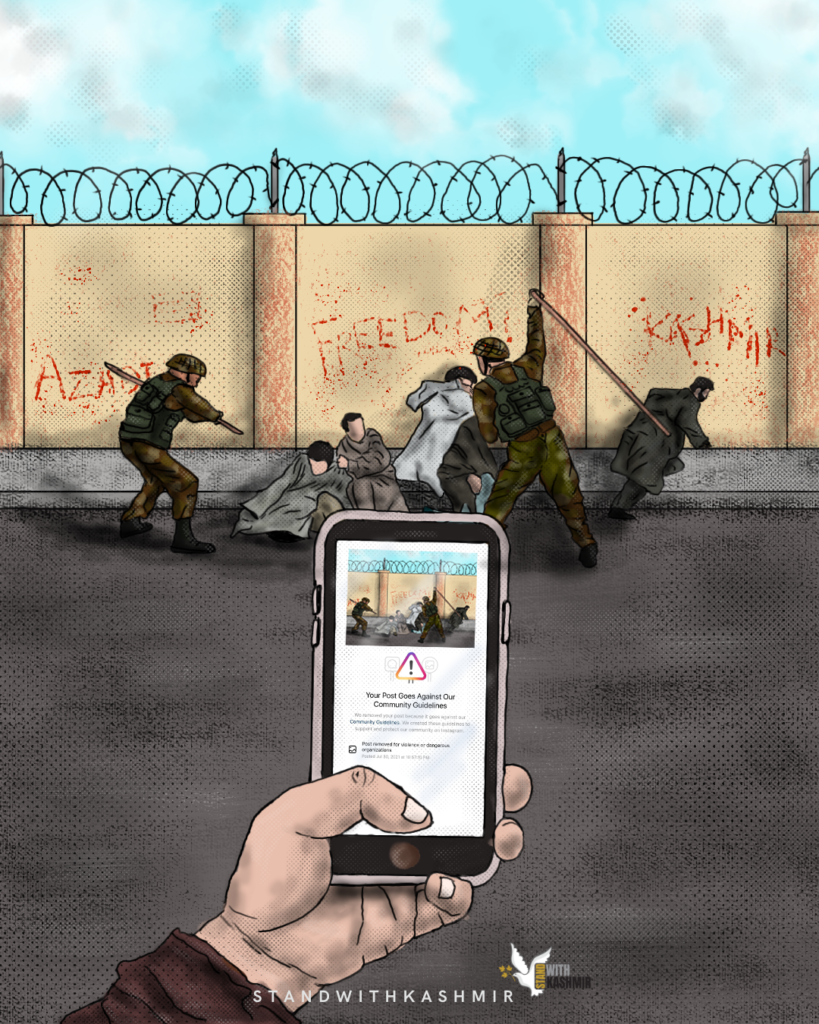 On April 20, 2020, a Kashmiri photojournalist, Masrat Zahra, was booked under the UAPA for “uploading anti-national posts with criminal intention to induce the youth and promote offense against public tranquillity” (via Indian Express). She had shared photographs of her reportage. The 24-year-old’s work mainly covered women in conflict.

In September of 2020, 8 students and 1 teacher were booked under the anti-terror law for playing a game of cricket in memory of a slain pro-freedom fighter, Syed Ruban. The players were criminalized for “glorifying militancy” and booked under Section 13 of UAPA.

Demanding The Remains Of The Deceased.

On February 5, 2021, a Kashmiri father, Mushtaq Ahmad Wani, whose 16-year-old was framed and murdered in a fake encounter by the Indian armed forces, and seven others, was slapped with the UAPA for demanding the dead body of his son to be returned to his family. 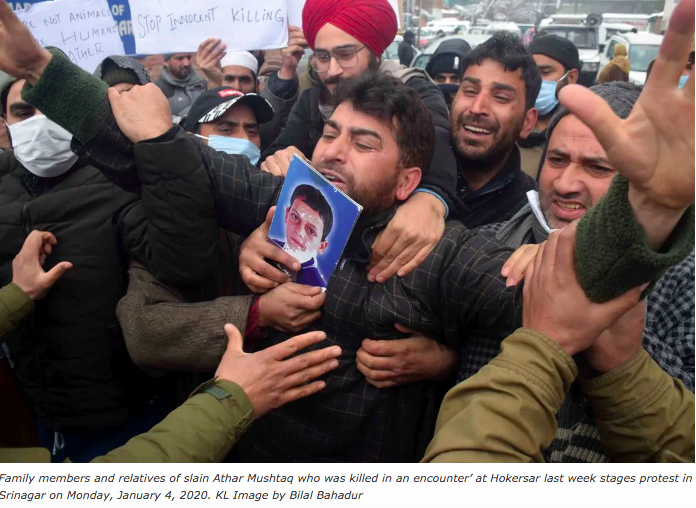 On March 6, 2021, 23-year-old Faisal Maqbool was arrested and slapped with the UAPA for protesting at Jamia Masjid after Friday prayers, an area known for protests and stone-pelting after Friday prayers. According to his family, who live 1 kilometer away from the Mosque, “Maqbool was playing cricket at a local playground on the day of the protest”. Maqbool is still behind bars.

Another case of booking Kashmiris with the UAPA under false accusations is the case of Bashir Ahmed Baba. Bashir was wrongfully booked for communicating with rebels across the border and spent 11 years in jail. 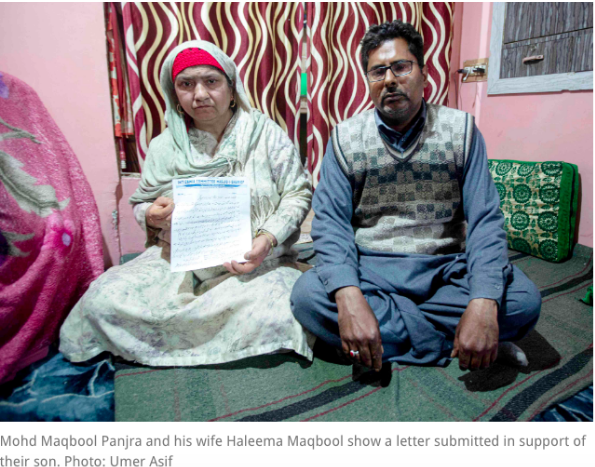 On March 25, 2021, an Assistant Professor of geography, Abdul Bari Naik, was arrested and slapped with UAPA for his activism work. His family believes that Naik is being criminalized because he “had exposed corruption in the government as well as encroachment of village land by the Indian Army”. In March of 2019, Naik was sent notices from the police superintendent of Kulgam which stated that “he was working against India’s national integrity and was putting out social media content which has resulted in law and order issues” (Scroll, 2021)

Defending Your Home against the Army.

On April 17, 2021, Samia Akhtar, a 30-year-old Kashmiri special police officer herself, was arrested under the UAPA for questioning why the Indian army conducted frequent raids of her and her elderly mother’s house. In a video, posted by Akhtar herself, she shouts at the army “ we are not going to be scared. This is our Kashmir. You are the outsider, where have you come from?”.

Sarjan Barkati, a religious cleric, was arrested and booked under the UAPA in October of 2016 for singing pro-freedom songs at rallies following the killing of Burhan Wani. He was held captive for four years and was released in 2020 just to be arrested again for speaking in support of Palestine. “He was arrested after he raised slogans and prayed for the Palestinian people in a mosque”, his family said.

Posing For A Photo.

On June 29, 2020, Naseema Bano was booked under the UAPA for a photo taken two years ago. In the photo, she was posing with an AK-47 with her son, who was a pro-freedom rebel. Her son was killed by the Indian armed forces in a gun battle in 2018, around the same time that the photo was taken.

Cheering for the Pakistani Cricket Team.

On October 24th, 2021, Pakistan won against India in the T20 match, and Kashmiris celebrated the historic win. Those who were seen as celebrating the win (especially on social media) were booked under the UAPA. India is probably the only country in the world that labels celebrations after a sporting event as “terrorism.”

Stay in touch with Stand with Kashmir.

Stand With Kashmir (SWK) is a Kashmiri-driven independent, transnational, grassroots movement committed to standing in solidarity with the people of Indian occupied Kashmir in ending the Indian occupation of their homeland and supporting the right to self-determination of the pre-partition state of Jammu and Kashmir. We want to hear from you. If you have general inquiries, suggestions, or concerns, please email us at info@standwithkashmir.org.