Since the occupation began in 1947, India has used gruesome torture as a tool of suppression against Kashmiris. Torture is used as a systematic mechanism to create a fear-psychosis in the Kashmiri people and weaken the people’s resolve to resist the occupation.

The United Nations defines torture as an act by which severe pain or suffering is intentionally inflicted on a person or a third person with the intention of obtaining information or a confession, or as a punishment for an act committed or suspected of committing, or on any reason based on discrimination of any kind. This definition extends to both physical and mental forms of torture.

Why is torture so widespread in Kashmir?

Torture is used as a systematic mechanism to create a fear-psychosis in the Kashmiri people and weaken the people’s resolve to resist the occupation. A report by the JKCCS & APDP in 2019 stated that torture is used against minor children, women, the elderly, students, political activists, journalists – essentially, any common Kashmiri can be picked up and tortured by the Indian army. Torture is used as a show of absolute power and to make examples out of people who are tortured, so that the entire society may submit to Indian occupation and colonialism.

Since the occupation began in 1947, India has used gruesome torture as a tool of suppression against Kashmiris. Torture against Kashmiris intensified further since the armed struggle for freedom began in the late 1980s. A variety of torture techniques (physical, sexual, & psychological) have been carried out by the Indian state with complete impunity for the perpetrators, thanks to laws like the Armed Forces Special Powers Act.

India’s Armed Forces Special Powers Act (AFSPA) is a law that grants the Indian military wide powers to arrest without warrant, shoot-to-kill, and destroy property in so-called “disturbed areas.” Given the impunity the Indian army is granted through this law, it can use torture on any Kashmiri with absolutely no consequences. Not a single Indian armed officer has ever been prosecuted for their crimes in Indian-occupied Kashmir. 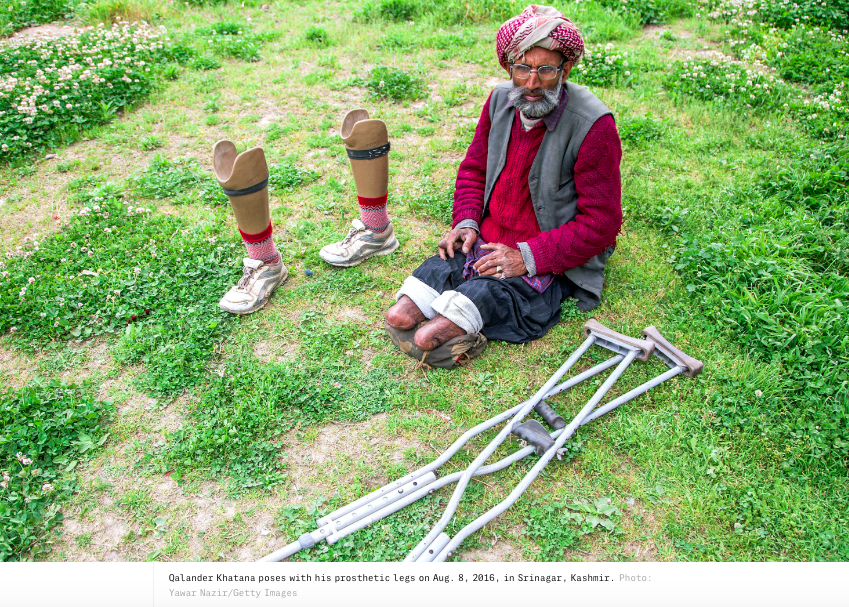 One night in 1992, Qalandar Khatana was dragged away by the Indian army to their camp at Mori. He was then accused of being a guide who had helped militants. He claims that the flesh from his waist and elsewhere was sliced with a blade and that he was then forced to eat bits of it. “I passed out and when I regained consciousness, I found my blood-stained limbs had been tied with strips of cloth”. His wounds had gotten infected with maggots & eventually his legs had to be amputated (The Wire, 2017).

Where does the torture take place?

Army establishments, camps, and cantonments have been used for illegal detentions and torture. Apart from the assigned land or buildings for the establishment of army camps, some government buildings, hotels, and cinemas were also converted into garrisons in the early 1990s and continue to be so. While Joint Interrogation Centres (JICs) were primarily constructed to execute torture in and around the Kashmir valley, the gruesome practice wasn’t limited only to these centers. Police stations, military camps, SOG camps, and even abandoned buildings were largely used for this purpose.

One torture site in particular, which was called the Shariefabad Army Camp, contained an iron tank in which the Indian army majors would routinely burn Kashmiris alive. A torture survivor, Junaid, who was held captive in the camp mentioned in an interview that “the [army] major was notorious for burning people alive in an iron tank inside the Shariefabad camp”. 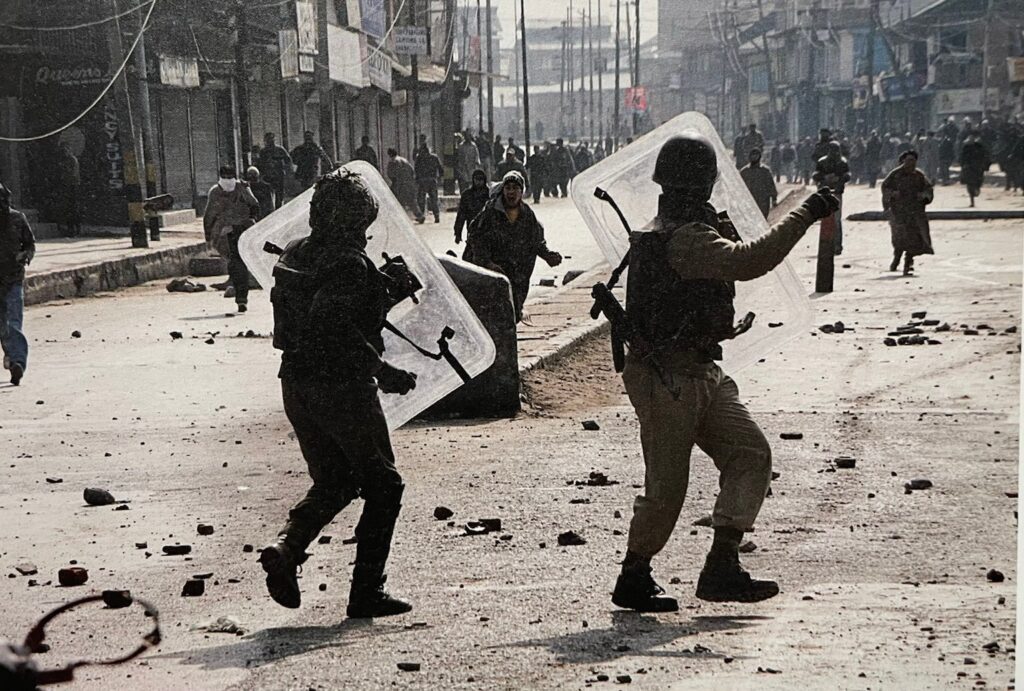 Where has India set up torture centers in Kashmir?

Torture has been used for reprisals, as a punitive measure, and as a controlling tactic widely and extensively across Kashmir. It is used as a systematic mechanism to create a fear-psychosis in the Kashmiri people and weaken the people’s resolve to resist the occupation. Women and children have been targeted particularly to humiliate and bring people into submission. Torture is used as a show of absolute power and to make examples out of people who are tortured, so that the entire society may submit to Indian occupation and colonialism. 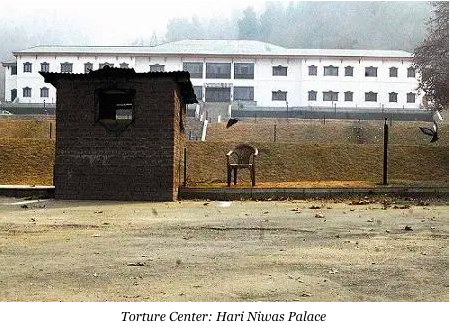 In the video below, you can learn about the most infamous torture centers in Kashmir, most of which are still present today. After 2016, some of these sites were also renovated and painted over to turn them into luxury residences for pro-Indian establishment figures in Kashmir. In an article for Kashmir Life, a Kashmiri reporter described in detail how such dreaded places like Papa-2, Cargo, Butcher House, Kawoosa House, and Hari Niwas Palace “were given a facelift”. The Indian government is purposely destroying material evidence of custodial torture by facilitating these renovations.

How is torture related to international law?

India’s systemic torture in Kashmir is a grave violation of International Humanitarian Law and Human Rights Law. The International Covenant on Civil and Political Rights prohibits torture and other forms of cruel, inhuman, and degrading treatment. Articles 4 and 7 of the ICCPR explicitly ban torture, even in times of national emergency or when the security of the state is threatened and the government of India is a party to the ICCPR.

India is also violating Article 3 in the Geneva Conventions. Torture, hostage-taking, and rape have all been prominent abuses by India in Kashmir, and it is evident that Common Article 3 forbids each of them. Rape also violates the ICCPR and Common Article 3 prohibitions on torture. 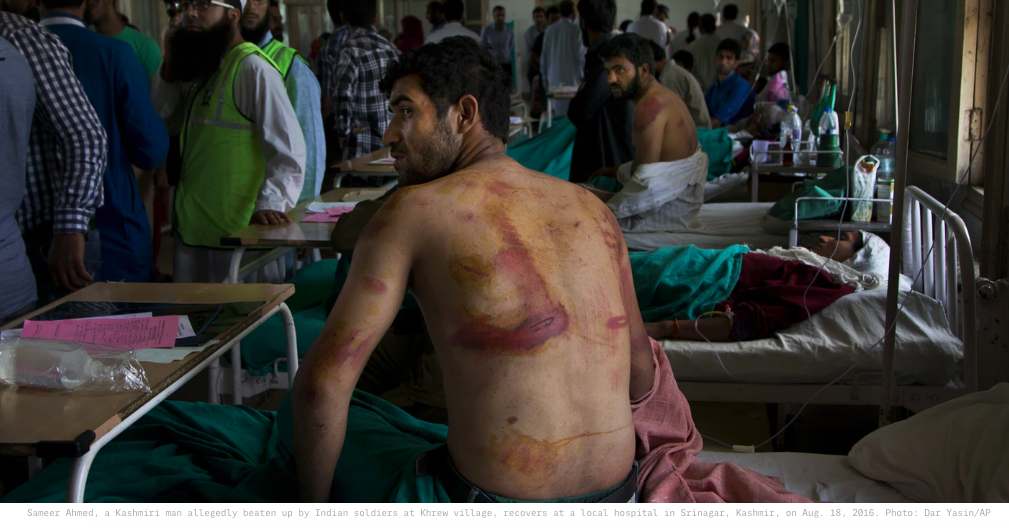 Stand With Kashmir (SWK) is a Kashmiri-driven independent, transnational, grassroots movement committed to standing in solidarity with the people of Indian occupied Kashmir in ending the Indian occupation of their homeland and supporting the right to self-determination of the pre-partition state of Jammu and Kashmir. We want to hear from you. If you have general inquiries, suggestions, or concerns, please email us at info@standwithkashmir.org.