Why is Rutgers University hosting an Islamophobe and a sexual predator to talk about Kashmir? 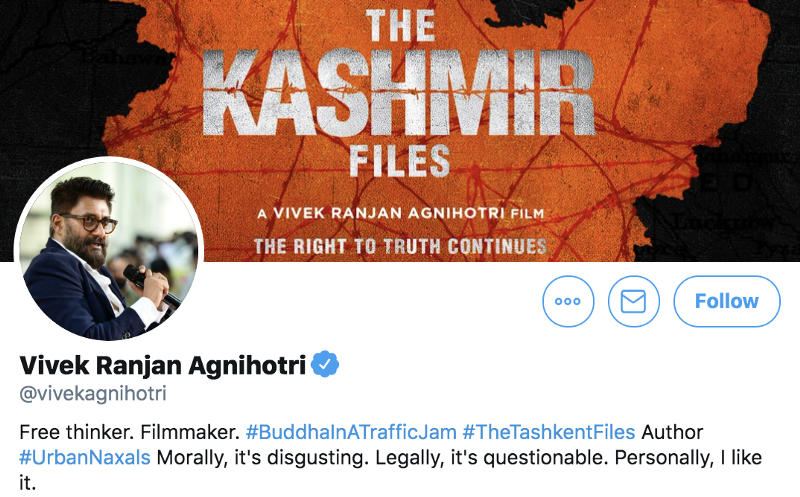 Stand with Kashmir calls on Rutgers and all other campuses hosting Vivek Agnihotri to rescind their invitation.

Who is Vivek Agnihotri and why is he in the US?

Vivek Agnihotri is an Indian filmmaker. His films include Buddha In A Traffic Jam and The Tashkent Files. He is currently in the US for what he describes as #Kashmirunreportedtour. In other words, he is here to spread propaganda for the Indian government. 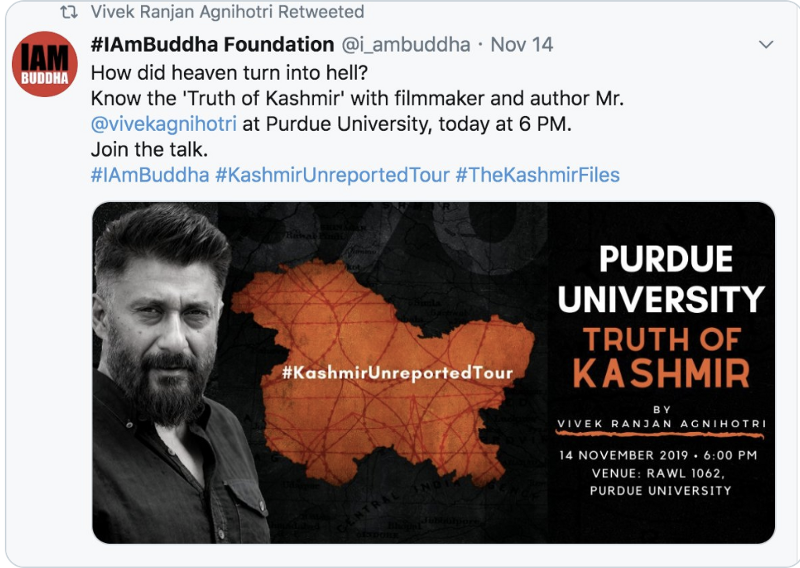 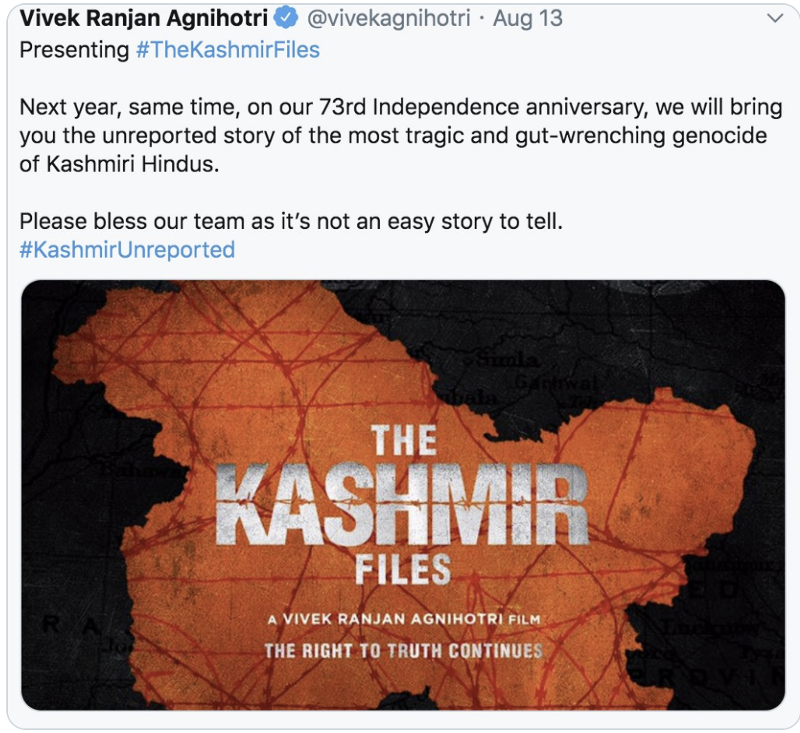 Why is he problematic?

He is an open and unapologetic Islamophobe.

He responds to all criticism of the Indian state by Kashmiri Muslims by describing them as “brainwashed and radicalized.” He refers to student pushback of his propaganda as playing the “Islamist victimhood card” — completely gaslighting the facts and the experiences of those whose families have been impacted by the Indian occupation of Kashmir. He also describes all dissent from Kashmiris as ‘Pakistani propaganda’. 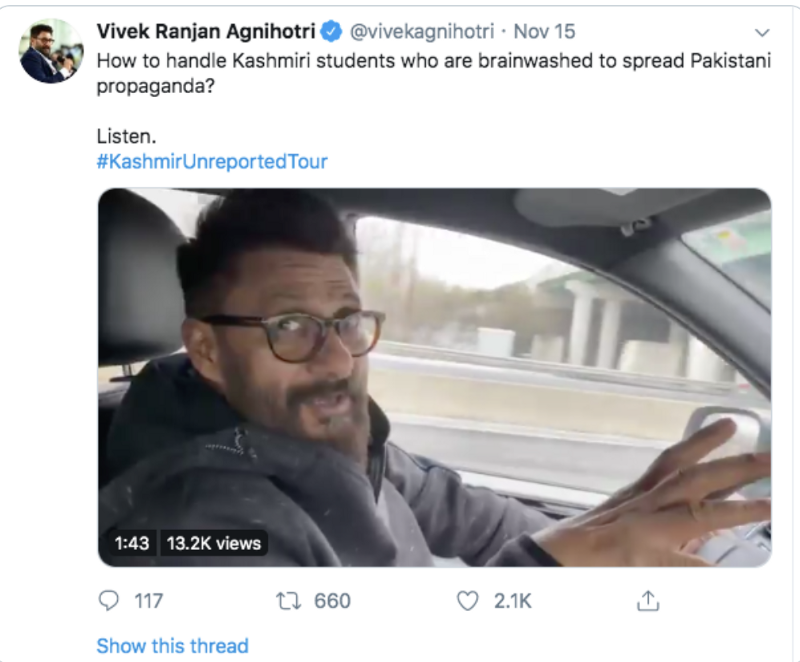 When Stand with Kashmir called him out — this is how he replied: 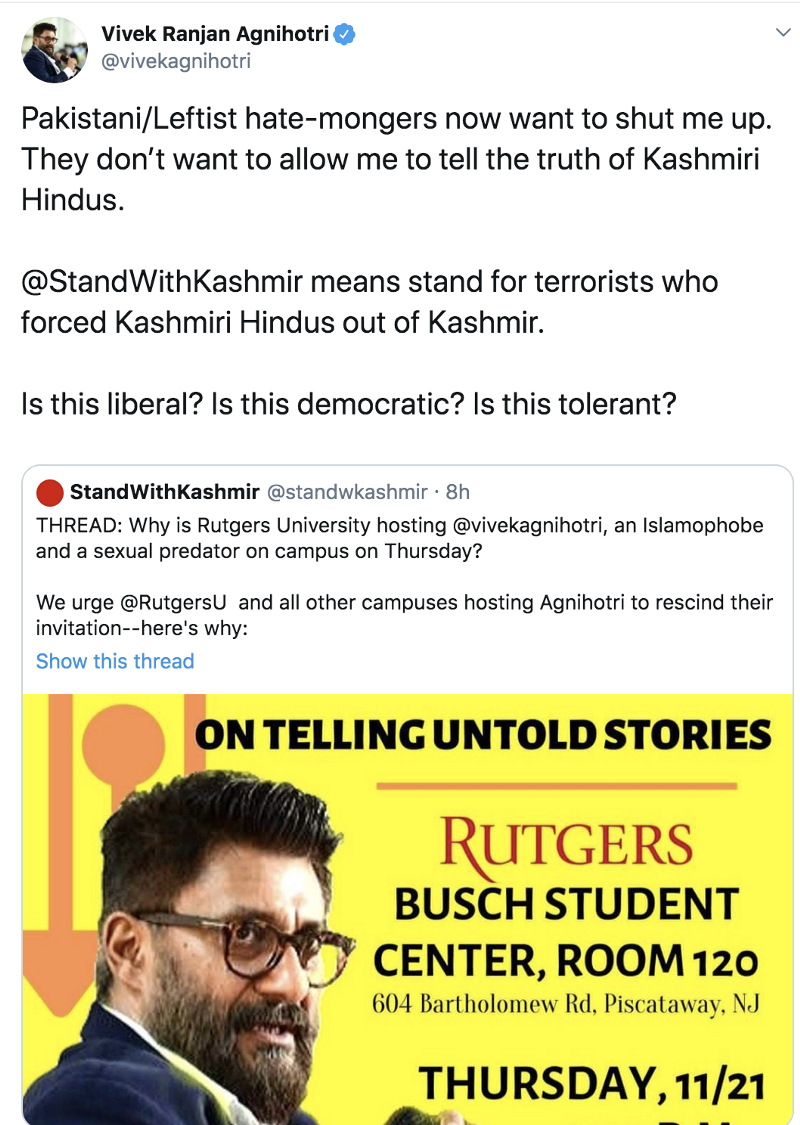 He is communal & casteist.

Agnihotri has a history of sharing false videos in order to incite religious communalism.

In 2018, he was on a flight and pointed out that a Dalit had a better flight ticket than him. Agnihorti is a Brahim. He said the pyramid is inverted.

He is a misogynist and has been accused of sexual harassment.

In 2018, Bollywood actress Tanushree Dutta accused him of sexually harassing her. He reportedly said to her: “take off your clothes and dance”.

A college campus is NOT the space for bigots & sexists. And he should not be given a platform. It’s unfortunate that student groups on college campuses have invited him, and we hope the Hindu Student Council will reconsider their decision.