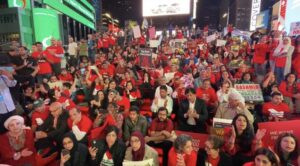 Kashmiris from the diaspora along with South Asian allies, faith leaders and solidarity groups will hold vigils in cities across the world on Sunday, October 27th to mark 72 years of Kashmiris’ resistance to the Indian occupation.

October 27, 1947 marks the day that invading Indian military forces imposed Indian rule upon the state of Jammu and Kashmir.

With over 700,000 troops now deployed there by the Indian government, Kashmir is the most militarized place on earth. Since 1990, Indian military actions have directly and indirectly led to the deaths of over 90,000 Kashmiris as well as the rape, torture, and enforced disappearance of thousands more.

The UN passed resolution #47 in 1948 at the end of the first India-Pakistan war which promised Kashmiris the right to determine their own future.

A plebiscite has yet to take place, and the Indian government continues to refuse to allow Kashmiris to exercise their political rights.

Kashmiris and allies will mark the anniversary by reaffirming their commitment to Kashmiris’ right to self-determination.