Indian General Bipin Rawat argues for internment camps for Kashmir’s children. This is not the first time the general of the colonial state has made such vile comments. 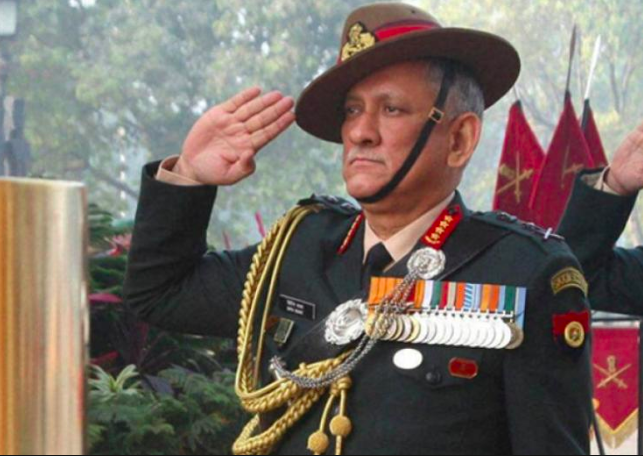 This is the first revelation of its kind wherein the talk of “camps” being built has emerged to add to the already existing network of prisons where innumerable Kashmiris, including minors, are lodged. General Rawat has a history of playing the Indian state’s stooge to near perfection and considering his services, the latter rewarded him with the first ever post of Chief of Defence Staff — the Modi government created this post to supervise all the three wings of India’s defence forces.

In 2017, Rawat gave an award to an Indian army major who had tied a young Kashmiri man to an army jeep and used him as a human shield against stone pelters.

At the time, he said that he wished that “these people, instead of throwing stones at us, were firing weapons at us. Then I would have been happy. Then I could do what I (wanted to do).”

He also said awarding the major (who committed a war crime) would boost the morale of the soldiers in Kashmir.

‘Wish instead of throwing stones at us, they were firing. Then I could do what I…’
New Delhi, May 28 (PTI): India’s army faces a “dirty war” in Jammu and Kashmir that has to be fought through…www.telegraphindia.com

On 9th January 2019, Rawat said that “misinformation and falsehoods about religion are being used to radicalize young people in Jammu and Kashmir.”

Similarly, on 27th July 2019, he asked Kashmiri youth to shun the path of violence and reiterated that their picking up the gun would not let them live long. He has campaigned for, what he calls, the “de-radicalization” of Kashmiris because in his military opinion, the latter are fodder for elements that radicalize them.

It does appear that General Rawat has been the forerunner of the “radicalization narrative” in Kashmir — that elements from Pakistan, or religious extremism, is manipulating the minds of Kashmiri youth and inciting them towards militancy. On 15th April 2018, as reported in Times of India, he said that “the radicalized youth of the Valley would soon realize that the gun was not the solution to their problem as neither the Army nor the terrorists would achieve their goals through it.” This is a very simplistic understanding of why young Kashmiris have picked up the gun. It does not take into account years of humiliation and suffering faced by average Kashmiris, especially young men, living under a brutal occupation, where all means of dissent have been criminalized.

Ironically though, the approach to resolve Kashir has only been militaristic (not ‘radical’ at all!) whereas a successful approach has to consist of demilitarization and Kashmiris being given the right to self-determination.

The sample of a military solution is found in General Rawat’s own statement from 10th May 2018, carried by Indian Express: “I want to tell Kashmiri youth that Azadi isn’t possible. It won’t happen. Don’t get carried away unnecessarily. Why are you picking up weapons? We will always fight those who seek Azadi, those who want to secede. (Azadi) is not going to happen, never.” The absolute denial of the fundamental right of Kashmiris embeds in itself a solution that India seeks to impose through force, against the wishes and will of Kashmiris.

Need to tell youth Azadi will never happen, you can’t fight us: Army Chief General Bipin Rawat
General Rawat said he is perturbed by the killings. “We don’t enjoy it. But if you want to fight us, then we will fight…indianexpress.com

Criminalization of every act of resistance against Indian rule in Kashmir is at the heart of Indian control. This is evident in the manner India deals with these acts: armed rebels and stone-pelters get killed, writers and journalists get arrested, pro-freedom leaders get imprisoned or house-arrested and even artists are questioned. Basically, the Indian state suppresses everything in Kashmir that in any way resists the idea of India.

Thus, General Rawat on 16th December 2018, as noted in the Daily Excelsior, said that “the youth carrying stones should fall into some category of terrorism even though law doesn’t accept stone as a weapon.” He continues: “some of them are being lured by money. Others were being pressurized that the militants will knock their doors in the night if they don’t pick up the stones. A fear is being generated among the youth (to pick up stones).” Again, this narrative completely overlooks the root causes of resistance amongst Kashmir’s youth. Indeed, given those who resist are detained, arrested, tortured, killed, or blinded, one wonders why Kashmiri youth would put their life on the line for a paltry sum of money? How does the “generation of fear” cause youth to pick up stones, when the act of picking up stones results in an even more fearful outcome?

The Economic Times on 12th June 2018 carries another of General Rawat’s statements wherein he says: “Talks must happen. The issue is that a lot of locals are joining militancy. We kill them and more would join. Infiltration can be controlled, but this cycle of recruitment of local youth can go on and on. So…let’s give peace a chance and see.” The mere mention of talks, if juxtaposed with the previous statements, is a ruse. Such ruses, disguised as promises of dialogue and peace process, have been a characteristic feature of Indian state policy vis-à-vis Kashmir. It symbolizes the Indian liberal class argument that is supposedly based on democratic politics and wants a solution to the Kashmir conflict through talks while their military — which they are proud of — kills, rapes, tortures and imprisons Kashmiris with blanket impunity.

Let’s give peace and talks a chance in Kashmir: General Bipin Rawat
“Talks must happen. The issue is that a lot of locals are joining militancy. We kill them and more would join…economictimes.indiatimes.com

On 5th August 2019, when the Indian state scrapped Article 370 of the Indian constitution, the Indian military grid in Kashmir curfewed the whole state, imprisoned thousands of people and shut down all forms of communication. As of now, the restrictions have been eased a fraction — postpaid cellular services have been restored, internet services have been made available in government offices only and business activities have partially resumed. Despite Kashmir still being cut off from the outside world, the blame-game did not stop. On 25th September 2019, General Rawat, the then Army Chief, claimed that “those surviving on terror say there’s shutdown in J&K.” This after reports, articles, documentaries, videos, and images depicting the stringent suspension of life and liberty in Kashmir have flooded international media on a daily basis. But denial has been the Indian state’s trademark riposte.

Those Surviving On Terror Say There’s Shutdown In J&K: Army Chief
Army chief General Bipin Rawat reaffirmed on Monday that people were moving around freely in the Kashmir valley and…www.ndtv.com

On 20th October 2018, he had said that “somebody was working behind the scenes at the instance of terrorists to disrupt peace in J&K”. It was the usual blame-game that Indians — from the state to the people — have been employing to discredit Kashmiris of their agency to voice their own politics and also deny their state’s own role in causing ‘false flag’ attacks to discredit the movement for freedom.

Just a few days ago, on 12th January 2020, DySP Davinder Singh was arrested with two militants traveling in a car. The DySP is the same person who asked Afzal Guru to accompany 2001 Indian Parliament attackers to Delhi, as alleged by Afzal in a letter to his lawyer. It raises serious questions — not for the Indian media though — as to how the deep state is calling the shots in Kashmir.

The fact of the matter is that General Rawat issues statement after statement against Kashmiris and their movement because that is his role and that is what he gets paid for by his employers. He spearheads the killers, rapists and torturers of Kashmiris. He represents his state in the most transparent and real form. The essence of India is embodied within him, and his statements, and the actions of his army — the army which the Indian nation bestows with pride and prestige.

This is not just a general speaking off-the-cuff; this is a general letting people know what his country has planned to set into motion.

Faheem Hamid Lone is a B. Tech Student.