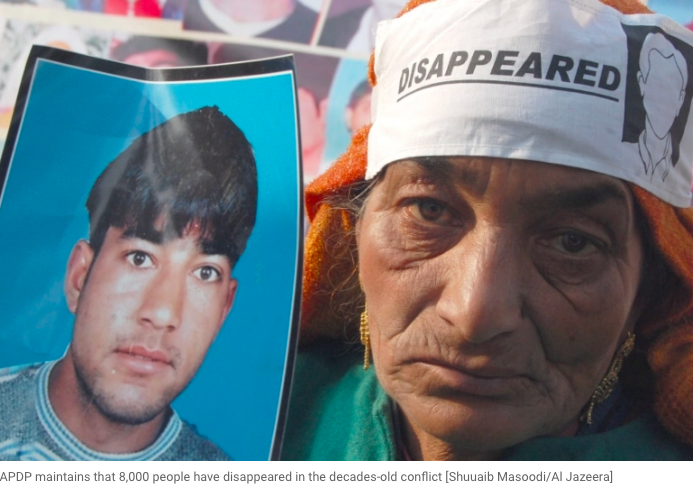 August 30 marks the International Day of the Disappeared. Enforced disappearance consists of a kidnapping, carried out by agents of the State or organized groups of individuals who act with State support or tolerance, in which the victim “disappears.”

According to the UN, “having been removed from the protective precinct of the law and “disappeared” from society, victims of enforced disappearance are in fact deprived of all their rights and are at the mercy of their captors”.

In 2011, over 2,700 unmarked graves were identified by the 11-member team in four districts of north Kashmir. Despite claims of the local police that the graves contained dead bodies of “unidentified militants”, the report points out that 574 bodies have been identified as disappeared locals – 17 of these have already been exhumed and shifted to family or village gravesites. The report concluded that the 2,700+ bodies of Kashmiris were subjected to enforced disappearances. These graves are proof of mass murder by the hands of India. 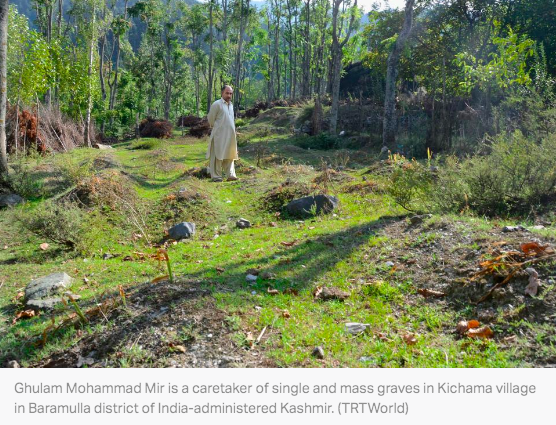 There are over 7,000 unmarked graves in Kashmir – a vast majority contain the tortured and mutated bodies of those who were subjected to enforced disappearances.

The state not only denies the phenomena of enforced disappearances, but it has also legislated certain laws, like AFSPA, and provided full impunity to the perpetrators, thus protecting them, thereby creating hurdles in acquiring justice. The Association for Parents of the Disappeared: Of the 8,000 to 10,000 civilians enforced disappeared, Javaid Ahmad Ahangar of 16 years of age was picked up from his home on August 18, 1990, and never to be found again. His mother, Parveena, began an unending search for him and in the process organized an entire group of family members also looking for their loved ones. The result of such an ongoing search is APDP – Association of Parents of Disappeared Persons, with Parveena Ahangar as the Founder and Chairperson. For over a quarter of a century APDP, with the leadership of Parveena, has been fighting for justice and demanding answers from the state about the whereabouts of all such 8000 to 10,000 missing Kashmiris. 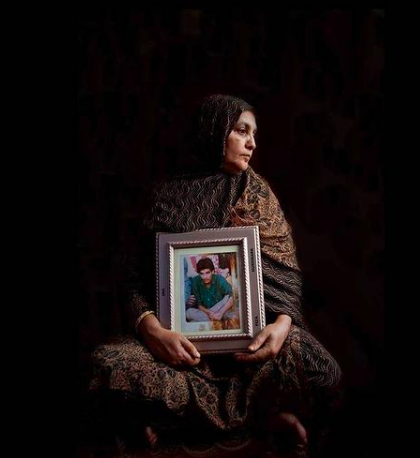 “The dead dies, he has a grave. They disappeared, they do not let us mourn properly. They ache in us every moment,” says Parveena Ahangar. According to Ahanger, many mothers have died in their quest to find their missing children. ‘Enforced disappearances’ — as these cases are locally known — are more painful than death, she says. “When someone dies, he has a grave. His family sees his dead body, touches his face. At least there is emotional closure. But when your child is taken away and disappears, you don’t know what to do. You struggle between longing and hope. You don’t know where he is, what he is doing, or what happened to him. There is so much trauma, and so many storms rage inside you”.

Ahanger along with the mothers, wives, fathers, and children of the victims of enforced disappearances gathered at a public park in the commercial hub of Srinagar for a protest on the 10th of each month. However, this has been difficult to organize since India’s re-annexation of Kashmir in August of 2019. In October of 2020, the Indian government raided Ahanger’s office, accusing her of separatist activities. During the raid, “several incriminating documents and electronic devices had been seized”. India’s mass raiding spree also included offices and residences of human rights activists & journalists in Indian-occupied Kashmir.

Rights defenders say India is reluctant to open the mass graves in Kashmir because it will also unearth a suppressed secret: years of alleged abuses involving torture, gun battles staged by the police, and the enforced disappearances of thousands of civilians. 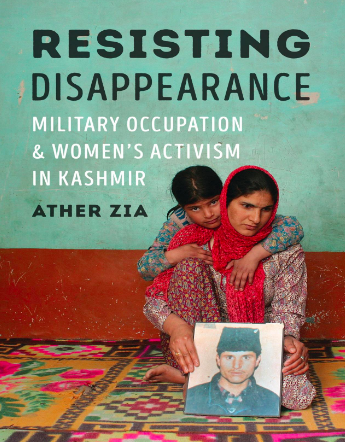 Resisting Disappearance, by Ather Zia. Can be ordered here!

Stand With Kashmir (SWK) is a Kashmiri diaspora-driven independent, transnational, grassroots movement committed to standing in solidarity with the people of Indian occupied Kashmir in ending the Indian occupation of their homeland and supporting the right to self-determination of the pre-partition state of Jammu and Kashmir. We want to hear from you. If you have general inquiries, suggestions, or concerns, please email us at info@standwithkashmir.org.